This is the first of a series of backlog posts covering things i have been doing but never got around to writing about. Last December I did a silversmithing course to learn how to use the tools I inherited, as my previous attempts had been broadly unsuccessful, particularly in the realm of soldering. On this course I learnt a number of techniques including sawing (after breaking a great many blades), soldering, granulation and stone setting. After practicing on a number of pieces in copper I made two pieces in silver: A ring and a necklace.

The necklace was based on an amber doughnut I had that was previously hung on some leather lace. The challenge for this was to make a setting that would allow the amber to spin freely. The solution is shown bellow in cross section. The key is in the granulation (silver melted into a ball) in the hole of the stone, which prevents it from falling out. 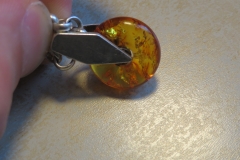 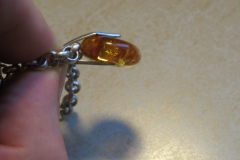 The ring is fairly plain with a black opal in a Cabochon setting with granulations on each side. The tricky part of this was soldering all the parts on without melting the previous solder off, since the balls on each side had to be done separately ( The ring had to be on its side so they didn’t slide off) and hard and medium solder (which melt at a higher temperature) had already been used to solder the ring shank and stone setting.

A while ago I got a large amount of my grandfathers old silversmithing tools that had been sitting in storage for ages. With the tools was a reasonable amount of silver as well so I figured I would try my hand at making some jewelry. That never really worked because I couldn’t get the soldering to work properly so instead I decided to basically reuse skills I already had and do a bit more dishing (see article on making a helmet) and the best way I could think to do that was to make a uselessly small bowl. making the bowl, doesn’t actually only require dishing, I also used raising, which involves increasing the curvature by hammering the piece over a ball stake (raising doesn’t always have to be on a ball stake, it can be on many different shapes but in this case it was a ball). I have to admit that my memory is not very good for this project so I do not know how I did specific bits such as small convex curve at the bottom or the rim.

For the dishing I used A tool called a doming block and a small ball peen hammer. This was simply hammering into the appropriately sized form until roughly the right depth was achieved. At that point I moved onto raising. The advantage of raising over dishing is that it can be used to give more varied curvature than dishing, as you can hopefully see the in the edge of the bowl. The process for raising is fairly like dishing but in reverse. The piece is placed on the stake with the convex side facing up and then, using a flat narrow headed hammer, you strike slightly away from the point of contact between the piece and the stake, which move that bit of the metal down into the space. Then move the piece round and repeat around the surface until the desired shape is reached.

The rim is flared out and also curved under itself to give a clean rounded edge. I am now not sure in which order I did these operations. I am thinking that it is more likely that I flared out a double width rim and then folded half of it back under. To do this I would have to hammered it around a sharp edge of some sort but I do not remember exactly what I used. Once it was done I hammered around the rim with the edge of a square hammer against a flat surface to put in the decorative lines.

For the dent in the bottom I think the most likely way I did it is, once the rest was finished, I placed it upside down and then just hit the bottom with a ball peen hammer.

Then to finish it up I polished it up with some emery polishing paper and then a small polishing wheel on a Dremel. 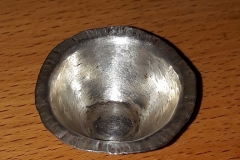 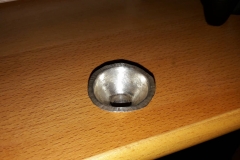 That concludes the making of a tiny and useless bowl. It is mainly good as an exercise for practicing techniques on a smaller scale.