Ok, instrument is a bit of a stretch, I mean like a hunting horn or a war horn sort of thing. You would be hard pressed to get any music out of it. To be honest you are pretty hard pressed to get a single good note out of it. That is because the mouthpiece I made is not particularly good, which is ok because the point of this horn was experimentation. I got myself 3 horns: one really big one and two smaller ones, one that looked really nice and the other that had some defects and a rather rough surface. I started working on this one first to try and work out a good way to make them and if it didn’t work it wasn’t a huge loss as I still has the two nicer ones.

The horns I bought were pre-cleaned out, if they weren’t there would be a lot of preamble cleaning out the stuff that is on the inside of the horn. this is rather outside the scope of the article as I have no experience with this, if your horns are like this do a bit of searching and you will quite easily find instructions on how to do this.

There is really very little that has to be done to a cow horn to make it into an instrument, most of it is already pretty much in the required shape. All that needs to be done is to put a hole through the pointy end and make that into a mouthpiece. Horns use a mouthpiece like that of a brass instrument, which are much simpler than what you find on other instruments such as woodwind. You can actually just make do with a plain old pipe with no embellishment at all (this is actually a training exercise sometimes used for people learning brass instruments) but this is a lot harder to play and doesn’t sound so good. The basic shape of a brass mouthpiece is a narrow tube that widens into a bowl like shape, which is where the lips are placed.

My first method of making a mouthpiece was to cheat and not make one at all and just steal one from a brass instrument and stick it in the horn. To do this I cut a small piece of the point off the end to give a flat face and then drilled a hole through the solid end of the horn into the hollow bit. Then I put the mouthpiece into the hole and it worked pretty well.

That isn’t really in the spirit of things though (and it didn’t really look that good) so I set about thinking about how I could best make something myself. All the most proper ways to do it such as casting something and turning it on a lathe or turning it from wood were not really options for me. I attempted raising something from sheet metal but that quickly turned out to not be feasible. My next idea was to try to carve the bowl of the mouthpiece into the horn itself. To do this I had to make another cut further up the horn so as to get the larger diameter necessary. The trouble turned out to be that the horn did not take kindly to being carved and it proved impossible to bit a curve into it and I just ended up with a flat edge. This hadn’t really worked but the main trouble was that I had painted myself in to a bit of a corner as the end was now really wide and had a large hole in it, which rather limited my options for new ideas.

The next plan was to make a piece out of wood that would sit in the gap the last failure had left and then to a carve the bowl of the mouthpiece into that. This also did not really work. Partly because of the wood that I had at the time, which did not take to carving very well, and also because of my tools forming the bowl proved to be rather tricky. Had I had a lathe I think this would have probably worked (though I am still not sure how good a wooden mouthpiece will ever sound) but working with a fairly large set of chisels in poor quality wood it wasn’t really going to work. 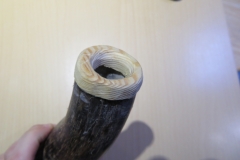 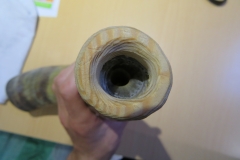 This then leads to my last attempt, which was easy enough to execute but doesn’t work very well. I cut out a ring of wood and curved one side to give it a better surface to blow on and then glued this to the end of the horn. It doesn’t look particularly good and could have been made to look a bit prettier but once I had seen that it wasn’t going to work I didn’t think it was worth it.

Finally I polished up the horn, which was just done by working through steadily finer grades of sandpaper. Because the surface was fairly rough and had some cracks in it it wouldn’t be possible to get it to a really high quality finish. For this stage its important to wear a dust mask as, with any process that produces a lot of dust, it really isn’t something you want to be getting in your lungs.

I was going to record a clip of me playing the horn to demonstrate the sound it makes but I forgot to do it before I left and as I am the only one of my family that plays a brass instrument (and this one is a notably difficult one to play) I can’t ask and of them to record it for me. If I remember to do it when I return home that may be added to this article at some point. 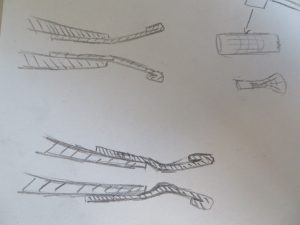 During the course of writing this article I came up with an idea for how I might be able to make a mouthpiece. That is to buy a metal tube and then hammer that into to shape. This would probably be quite a complex thing to do but I think would be much more achievable than working from flat sheet. Unfortunately this horn is a bit too far gone for this to work so it will have to be saved to try out on the next one, whenever I end up having the time to make that.